Exhibition Feature: Pleasures of the Gaze

Pleasures of the Gaze, curated by Luciana Garbarni, is set to be the launch of After Nyne Magazine’s curatorial practice.  The show exhibits an array of visual artists, from Hollywood based photographer Tyler Shields to CASS Art Prize Winner Jean-Luc Almond.  Appropriately located in several rooms of The Exhibitionist Hotel, the exhibition is meant to discuss the concept of visual culture, of seeing and perceiving, “Whether it’s just plain voyeurism or if every double-take relates to an aspect rooted a little more introspectively…each piece stands to be concerned with the outward as well as the inward attitude to allure.” London Visual Arts explores this theme by taking a closer look at the works of Ant Pearce and Jean-Luc Almond.

Ant Pearce: My creation process oscillates between the desire for structure, through mapping, which I then abandon in favour of fluidity. Thus, each work is created through a combination of control and chance, conscious and subconscious, with the formation of overlapping and intersecting angular planes resulting in a raw sense of flux and instability.

All works [for this exhibition] have been created by sewing cotton thread onto paper. One work also incorporates metallic thread and structural gel. However, thread drawing makes up only part of my overall practice. 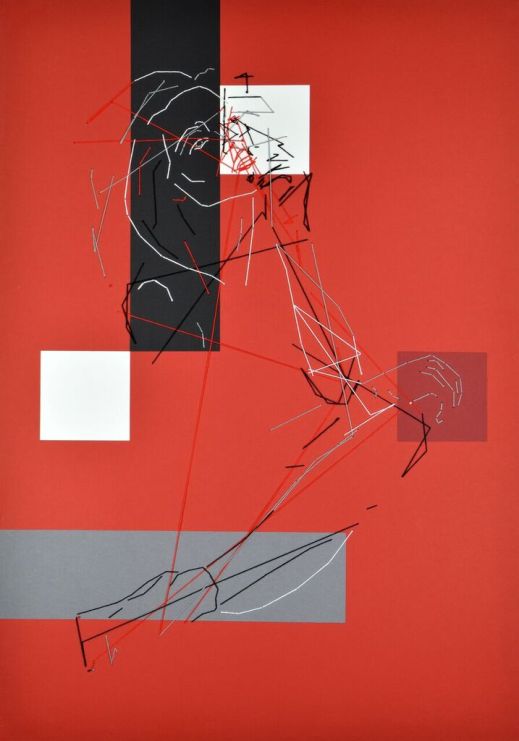 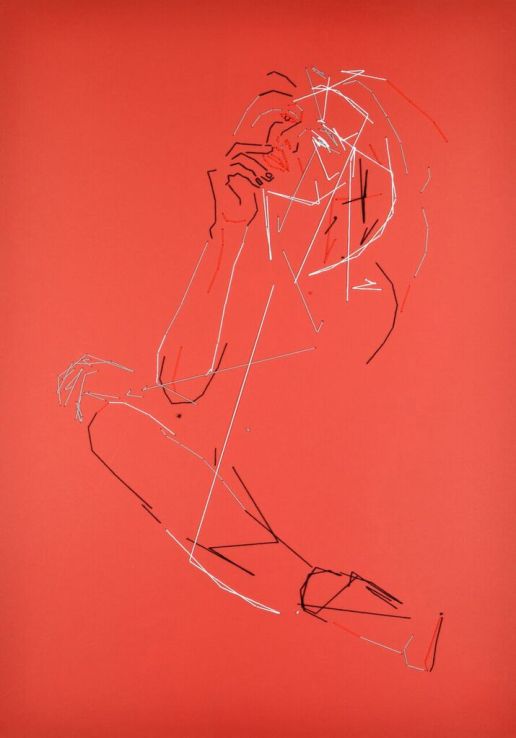 Jean-Luc Almond: I am influenced by memorial portraiture, Victorian photography, early black and white film, mug shots and newspaper images. My subject matter is layered which is in dialogue with my painting approach; I layer multiple paintings on top of each other before scratching away at the surface to reveal phantasmic faces peering from beneath, Therefore, my paintings are constructed through the processes of both creation and destruction, damage and repair.

My work explores darkness and light, creation and destruction, and mortality and fragility. I am obsessed by texture. I am interested in the transformations that can take place when I am no longer a slave to the image and the painting becomes more about the paint and the surface. I see paint as a vulnerable skin hovering and clinging to the subject, masking the identity of the subject. Sometimes a random damaging mark can surprisingly enhance and enliven the image.

AP: Many things [inspire my work], everyday observation and interactions with people in combination with events in dreams and from the past — numerous works begin taking shape while I am at a concert, on the bus or walking.

From the arts I have found a strong connection with classical music, particularly the piano works of Bach, which are profound, suggesting the breaking apart and reformation of matter. I also find listening to the written works of Kafka andDostoyevsky, like a ‘music’, allows me to connect with my own sense of what I see and feel around me. I rely less on fine art. However, I do have a love for the works of Bacon, Schiele and Picasso.

LVA: What do you look for in a subject?

AP: I find I will connect to something usually delicate and/or broken but which has a strength as well as weakness and violence hidden just beneath the surface — how fragile everything is around us and how quickly relationships and situations can fracture or shatter.

LVA: Could you discuss the subject of your works, ‘Tease’ and ‘Dark Head’ and their position within the theme of the exhibition?

JLA: The exhibition is about the fascination of the act of looking and what it says about us as a culture. My painting ‘Dark head’ forces the viewer to look because the layered resin surface makes it difficult to see the face, which appears preserved beneath. The piece explores my ongoing fascination with ambiguity and how sometimes the most interesting and curious things are that which cant be seen. ‘Tease’ is an example of how my art transforms through my layering process. It is the result of multiple paintings layered on top of each other. There are a lot of visual clues of the paintings history, for example the textured ochre ground at the bottom right of the painting that hints at a previous composition. Although the inspiration was a photo of Unity Mitford, it barely resembles the original image but captures some of its resonance and eerie qualities. I like the idea of the painting being assembled through damage, allowing paint to dictate the image over the artist hand. I generally prefer wood to canvas because it allows me to battle with the work. I used to bust holes in my canvas paintings. Wood allows me to create thick heavy textures and gives the painting a structural stability. 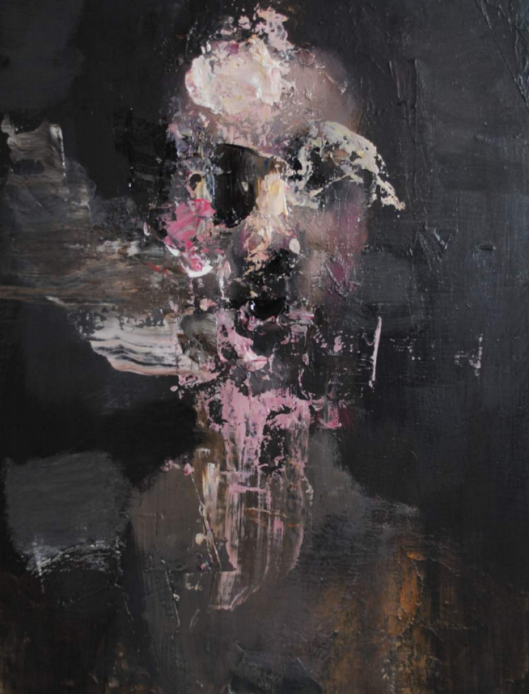 LVA: Discuss your work in the context of Pleasures of the Gaze.

AP: My practice focuses on the concept that man is condemned to exist imprisoned. I explore the fragility of life, drawing on human psychology. Each work examines the human condition, dissecting the psychical personality while encompassing aspects of narcissism, gender and the life and death drives.

The exhibition includes three works which focus solely on the British super-model, icon and muse that is Kate Moss. Concepts are communicated through ‘breaking’ and ‘reforming’ the image(s), using regularly shaped blocks in combination with the straight and diagonal lines formed by sewing thread onto paper. Each piece embraces the idea ofdeconstruction and the spiritual importance of the line as explored by Dutch avant-garde, constructivist Theo van Doesburg. The colour palette for this series was inspired by the British luxury fashion house Burberry.

There is also a single piece from my latest body of work  ‘Beyond the Pleasure Principle’, which combines thread with structural gel on paper.  ‘Beyond the Pleasure Principle’ was inspired by Freud’s work by the same name. The series explore how repetition and repression in human behaviour provides an illusion of being in control by moving through a state of unpleasure to a state of pleasure while touching on aspect of imprisonment and alienation. The influences of works by Schiele, Bacon and Kafka’s ‘Die Verwandlung’ (‘The Metamorphosis’) have emerged unintentionally during the creation process but are clearly visible in the final pieces.

Pleasures of the Gaze launches with a private view November 26, 2015 from 6-9pm at The Exhibitionist Hotel located in South Kensington.