Christian Sawalski is a London-based painter and video artist born in Germany and graduated with a Bachelor in Fine Art in Berlin, Germany.

He started exploring the medium of paint early in his life and has since then focused on the human form as his subject matter, depicting the uncanny, angst and cruelty of the conditio humana, often rooted in historical contexts. To transport his message, he is using the body as an object and stage of rites and rituals. His style shows figures caught in time, suspended between realism and the deformation of expressionistic abstraction, mainly working with a minimal palette of just black and white or highly desaturated earth tones. 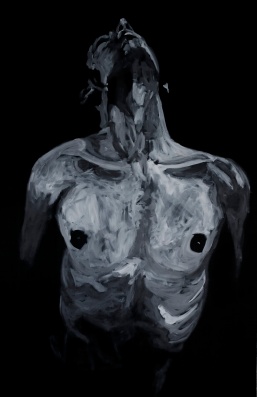 Apart from painting he is utilising video to approach the core of his work series from a different angle.

In the years during and after his graduation he has exhibited in various group and solo exhibitions, including Freies Museum and Kaleidoskop Gallery, both located in Berlin. One of his rare photographic works was selected for an exhibition as part of the European Month of Photography in 2010. A number of his paintings are represented in private collections across Europe and in Australia.

He is currently working on a series of paintings and videos depicting genocide as well as mixed media works dealing with apocalyptic quotes from religious scriptures which will include various types of metals on the canvases.